Birthright Bus 302 is in Israel! 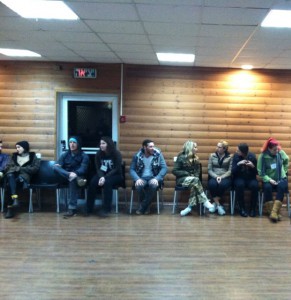 Participants on #Bus302 getting to know each other.

After a long voyage spanning numerous time zones, land masses and oceans, our group landed safely in Ben Gurion airport in Tel Aviv. After the first flight to Newark, during which most of the group congregated towards the back of the plane and filled the aisles with both bodies and conversation, you could already feel the group getting closer. Seat mates became dinner mates as we grabbed quick bites of burgers, pizza, fried rice and jamba juice before boarding our next flight.  Perhaps the combination of an early morning start helped many to sleep more soundly through the second flight. Those who were awake (due to neighboring sleep-stirrers and jet lag) were able to catch a glimpse of Israel even before we landed: public Jewish prayer. A large number of Orthodox men gathered in the aisles and the galley of the plane for morning prayers, much to the frustration of the flight attendants and the fascination of some of our participants.

When we landed, we said the Shehechiyanu – a blessing said when we start a new beginning or return to a place/memory/moment that we haven’t felt in a while – and some participated in the tradition of symbolically kissing the ground, much as Jewish pilgrims and immigrants before them have done for generations. In truth, it would be a few hours before our feet would actually touch the pebbled paths of Kibbutz Gonen, in the Golan Heights, where we will be staying tomorrow as well.

With little energy for anything else, and creaky-limbed from a two hour bus ride, we descended upon the kibbutz dining hall and enjoyed our first meal together: Moroccan-Israeli style buffet of chicken drumsticks, ktit-tsot (meat cutlets), couscous with veggie stew, carrot relish, cabbage slaws, babaganoush and REAL hummus.

The evening rounded up with a few ice breakers, a few words from our guide about tomorrow’s plan and a chance for everyone to share what they are expecting out of this trip. From the varied responses, it is clear that this trip is going to contain many angles, many ideas and many great contributions from all who are participating.

Previous: Profile of an Israel Outdoors Staffer – Keeping it Clean