For the second day in the north (Thursday), the group drove to Tzfat, a city with rich Jewish history. We started the day by touring the city, which is known as one of the four holiest in Israel, and meeting with renowned Kabbala artist David Friedman. Our group ended the day by visiting the Ascent learning center to discuss Jewish ethics. 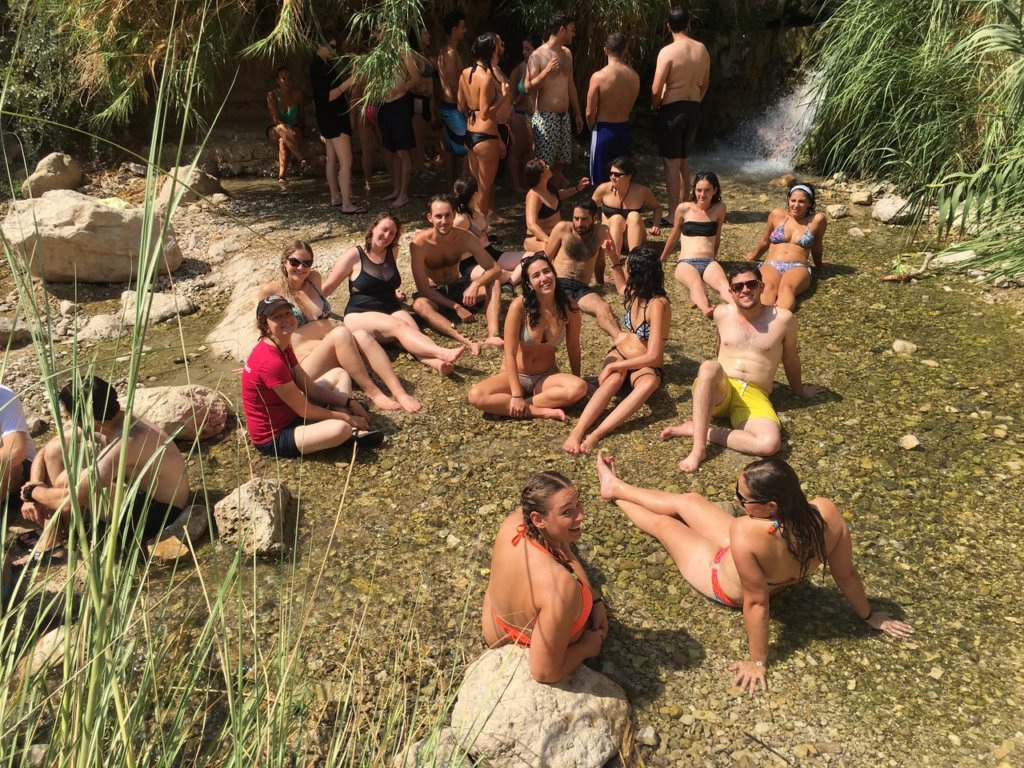 On Friday, the group left our kibbutz to head south towards Jerusalem, with two important stops along the way. First, the group got to hear about the politics of Israel from a Jewish, British Journalist. He talked about Israel’s relationships with its neighbors and his experiences covering Israel for foreign papers. Next, it was time to meet our eight new best friends, our Israeli peers joining the trip. In a quiet park, Amit, Adee, Chen, Idan, Sam, Ofir, Yoyo and Eitan brought our numbers to 45. After some brief introductions, we were off to Jerusalem to go spend Shabbat in the holy city. That night, we went to see a service unlike any other in the world at the Great Synagogue of Jerusalem. Jews from all backgrounds were praying together. We finished the night off with Shabbat dinner at the hotel.

For Shabbat day, the group had an 11am wake up to get ready for the crazy week to come. On the day of rest, the group started with a short activity exploring what we each believe it means to be a Jew. After lunch, the group spent the afternoon at the Israel Museum and a nearby park. After dinner and Havdallah, the group set out to explore the Machane Yehuda (a market in Jerusalem).

Sunday, the group headed out to the Old City of Jerusalem. After a few stops to discuss the history of the city, the group came face to face with the most well known place in modern Judaism, the Western Wall. Before heading to the Orthodox section, the group spent some time in the egalitarian section where we discussed what a bar and bat mitzvah really means. Next, the group was given some personal time at the Wall to pray or deliver notes.

After lunch in the Old City, the group headed to an exciting film on the history of Jerusalem. Finally, the group was given a much needed shopportunity at Ben Yehuda Street and Machane Yehuda. After returning to the hotel, the group had a few activities where we learned about the important work of Gift of Life, did some Israeli dancing, and spent a few minutes getting into the right mindset for the following day’s visit to the Holocaust Museum and Memorial.

Monday, the group packed their bags and headed for Yad Vashem, Israel’s Holocaust Museum and Memorial, where one of the museum’s fantastic guides led the group on an emotional journey exploring many different aspects of the Holocaust. The group then spent the afternoon at Har Herzl, Israel’s military cemetery, where we heard personal stories about Israeli soldiers who had lost their lives in combat. We ended the evening with a singing and dancing competition planned by our Israeli peers. After those 3 experiences, the group headed towards the desert for the next segment of the trip.

At 4:30am this morning, the group left the next hotel for Masada, an ancient desert fortress that we climbed in time to watch the sunrise over the Dead Sea. The group then explored the fortress and learned about the Jewish history there. We hiked down the infamous snake path to breakfast. Having been up for 5 hours by 9am, the group was ready for a little break so we spent the rest of the morning and afternoon relaxing by a beautiful desert spring and in the Dead Sea. Unfortunately, leaving the Dead Sea also meant saying goodbye to our Israeli peers, who had become an essential part of the group. Tears were shed and goodbyes said, but we’re all sure we’ll be seeing our Israeli friends sooner rather than later. As the group drove towards the Bedouin tents, the bus was definitely a little too quiet. At the tents, the group rode camels, learned about Bedouin culture and history, and enjoyed some fantastic Bedouin food, before heading out for some stargazing in the middle of the desert

Next: Losing Myself in Israel