John Swenson is currently in Israel with Israel Outdoors trip TL-31-266.  He’s live blogging while he is there.  Any it looks like the group is having a great time.  Thanks for sharing John! 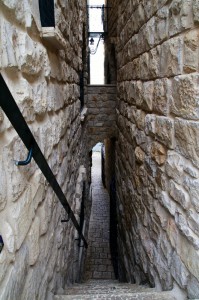 This morning, in what is becoming a tradition, or just a symptom of jet lag, a group of us again got up early to watch the sun rise. This morning there was some scattered cloud cover, which lead to a beautifully pink sunrise. While I was relaxing with my morning coffee talking Israeli/U.S. politics, which is much easier to do at six when you’ve been up since three or four, our active Navy officer was showing the rest of us up with a two hour insanity workout and our yoga instructor was holding class. One of these days I’ll stop being so lazy and join one or the other.

As this was our last day in Tiberias we all packed up our rooms before heading down to breakfast and onto the bus for yet another forty five minute journey to Zefat, our day’s focus. As always watching the land provided ample distraction along these trips, as well as picking up some of the local lingo from both the staff and our medic. Before too long we pulled into Zefat and walked up to the monument which gave us one of the first of the many vistas of the day. In the lower left of the scene is a yellow flag with writing on it that says messiah, referencing the belief that on his way to Jerusalem the messiah will travel through Tzfat.

After hearing Shimi’s introduction we started towards Defenders Square, stopping to pull out more money from a rare ATM along the way. Next door was a little marketplace; I’m constantly astounded by the amount of fresh produce here. In Defender’s Square was one of the last bastions of resistance of Tzfat’s defence in the Independence War. On the last night of the siege by Arab forces, with ammunition, supplies, and hope running low, all of the Jewish defenders gathered in the temple to pray, while at the same time, unknown to them, an Israeli unit was infiltrating through the Arab siege lines. In the morning, the resupplied and reinforced defenders broke the siege. If you look closely at the stonework throughout the town you can see the repairs from the damage caused by the fighting. Read More!

Next: 9 Things You Should Know Before Your Trip