Following a visit to the city of Netanya of Cincinnati Jews on an Israel Outdoors trip with the Jewish Federation of Cincinnati, a number of Israelis came to visit their counterparts in Cincinnati. Below is an excerpt from Cincinnati.com about this visit.

Ten Israeli visitors spent the last week of August getting to know Cincinnati in person. 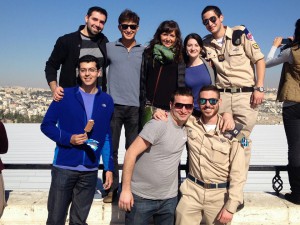 They were hosted by young Jewish professionals including Sammy Kanter of Loveland, Adam Greenberg of Hyde Park, and Max Cobey and Brianna Pecsok of Wyoming.

The Israelis’ visit here came a little more than eight months after a group of young Jewish professionals from Cincinnati visited Israel in December. The exchange visits with sister city Netanya, Israel, is part of the Cincinnati Community Birthright program sponsored by Taglit Birthright-Israel and the Jewish Foundation of Cincinnati.

They came to know one another while touring the whole country – the roots of their Jewish faith. The visit to Israel drew them deeper into their faith and their homeland. The Israelis’ visit to Cincinnati may not offer the same faith connection, but it does offer plenty to strengthen their personal connection.

During a whirlwind week the Israelis toured downtown Cincinnati, Over-the-Rhine, the Freedom Center, Plum Street Temple, Hebrew Union College, a Jewish and public school, attended a Reds game and the Reds Hall of Fame, and made workplace stops at P&G Marketing, Cintrifuse, Standard Textile, and the law office of Katz, Teller, Brant and Hild. What stood out for them?

“The Reds game stood out. They had literally no exposure to baseball. They had no idea what it was,” Kanter said. “There’s such a culture. Everyone knows what to do, when to do it, what to eat, even how you cheer, when you cheer; things we don’t really think about. They were fascinated. They felt like the whole experience was pure America.”

Kanter calls the Plum Street Temple a “Cincinnati gem” and said the visitors from Israel were fascinated by it as well. It is far more ornate than those they are used to at home. At home is exactly how Adam Greenberg felt in Israel.

“It was emotionally inspirational,” Greenberg said. “There were defined moments when I felt connected to home in Israel. I was able to connect more spiritually in Israel.”

In fact, each of the young Jewish professionals from Cincinnati felt the “connection” to their religious homeland during the visit. It drew them closer, inspired the relationships. They stayed in touch sharing group updates every Friday about how the trip to Israel affected them in their daily lives. It led them to host the ten Israeli visitors here.

“Fast forward eight months, they arrived, had gotten off the plane, I met them,” Greenberg said. “I was just overjoyed to see them after eight months.”

They have names. Bar Torbatti, Gili Sharon, Yahav Bronstien, Rotem Yaccobi, Chen Ganch, Dean Sinai, Tzlil Maimonie, Inbar Ayalon, Sharly Maimonie, and Amichai Murdechay all stayed at the homes of the hosts. Sharing meals, like breakfast before they began their day at the Jewish Community Center, or the traditional Shabbat Dinner, created special moments for the hosts and their visitors.

Brianna Pecsok said it was really special being able to share her Wyoming home with Tzlil Maimonie, who opened her home for them in Israel. It was nice for her to be able to show what her home and what her life is like here. Everything Cincinnati was a big deal for Tzlil including stopping the car to get a photo of a deer. Pecsok didn’t get to spend the whole day with her guest every day. She did for all of the evening activities.

“It was good to debrief with her after the day; kind of get her take on stuff,” Pecsok said. “It was more personal than in a big group discussion. They were interested in how we practice Judaism here. She was blown away by the Freedom Center here.”

They live in a society that is a Jewish society. They hear about Americans and American Jews. This visit to the U.S., to Cincinnati, allows them to meet Americans and American Jews and learn how their faith is practiced here. There are programs and activities here to support Jews in keeping their Jewish faith identity alive. That is something different than what the visitors experience at home in Israel where Judaism is their culture.

“It is a personal journey for each individual,” Cobey said. “I wanted to show them Cincinnati, the city I love, and build U.S. and Israeli relationships.”

Building relationships across the globe with sister city Netanya in Israel is only one part of the Jewish Foundation of Cincinnati goal to keep the Jewish faith alive in their youth. Showing how we are all alike as people, brothers and sisters in faith, is a lesson learned by these young Jewish professionals in our community.

Next: Update from Israel #Bus942