Congrats to former Israel Outdoors participant Natalie and her fiance Elad who she met when he was an Israeli student on a trip on their engagement! Thanks for sharing your story. 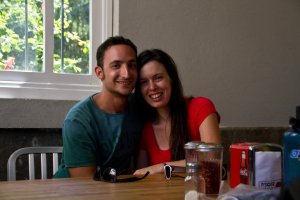 Elad and I met around August 20th, 2012. It was a few days into my Taglit trip. Funnily enough, both of us had experiences where we were planning on going on earlier trips but then something popped up. Fate! The first day I remember meeting him and not having any immediate thoughts but later that night we had a conversation in a stairway and I was asking him questions about Israeli dating and marriage customs, if they were radically different from American traditions, and the potential for meeting somebody serious on Taglit. We decided that it could really happen–of course we were just flirting–but that the only appropriate thing on the first day would be a kiss and so I kissed him on the cheek.

By the end of the second day we were a couple. I don’t know if it was the aura of being on vacation, but I fell for him very fast. He genuinely made me feel different than anybody else had. He displayed more humor, considerateness, and confidence than anybody I had ever met. I guess in retrospect it couldn’t be the aura of being on vacation, because I still feel that way. By the fifth day the Israelis had to leave and I was heartbroken. I don’t have a great memory (he will confirm this), but I remember those five days very vividly, climbing Masada, at the beach at Bat Yam, at the beach in Tel Aviv, staying up all night at the hotel in Tiberias, napping and laughing on the bus, walking around Sheinkin (the pizza at Agvaniyah hasn’t tasted as good since).

We pledged to stay in touch but we decided that we wouldn’t date long-distance. Of course over the next eight months, we were up and down. I can’t deny that the original excitement faded at some point and there were times where it was a struggle to keep any sort of momentum going. But no matter how many weeks we went without texting, one of us would always reignite the conversation at some point. So there was never a time when he had completely left my mind. At work, they called him Aladdin, my Persian prince, probably because I talked about him as if he was this magical cartoon character.

At the time, I worked for a large education company that honored Jewish holidays and I decided to propose something to Elad: how about I visit over Passover? Elad was a double major in Computer Science and East Asian studies, working part-time at an R&D company, and juggling Reserves. Probably also in consideration of the questions my visit raised–would we ever really be serious? was my visit just delaying inevitable disappointment?–he didn’t respond right away. But I think his sense of adventure prevailed, and he eventually said yes. 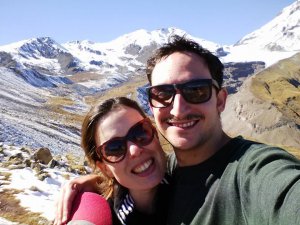 Fast forward to April, 2013 and we had a deeper repeat of Taglit–he introduced me to his family and friends, gave me a native’s tour of Tel Aviv, and took me to Haifa. However, as much as I personally kept to my promise to myself of keeping things light, we always felt an undercurrent of doubt, the question of what a serious relationship would actually mean and the long-term sacrifices that would necessarily be made. And immediately following the trip, we actually spoke less than ever.

Around that time I had been applying to MBA programs and waiting to hear back. Within a few weeks of returning to LA, I started getting responses. I was accepted to UCLA and University of Washington, waitlisted at University of Texas-Austin–and accepted to Tel Aviv University. Now I have to admit that however prestigious these universities’ programs are, all I really wanted to do was go to TAU. Call it youthful exuberance; don’t call it hard logic. I wanted to live internationally, I wanted to learn a new language, I wanted to test myself on a fundamental level, and probably I still wanted to check my hunch about Elad.

I arrived in August, 2013 in Tel Aviv and started an intensive Ulpan. I came understanding that nothing with Elad was guaranteed–in fact, he had started to distance himself about a month before my trip to ensure that I was coming for the right reasons. But, much like our relationship over the past year had always been, there was always a spark that kept it going. About a week later, I sent him a text, within a few hours he showed up, and after ten minutes we were dating again. He told me later that there was a night when he knew he was serious about me: it was in December, 2013 when my parents first met his parents and because of his Reserves duty he couldn’t be there. It was precisely the moment when I told him the dinner had gone really well that he had knew everything had changed.

I personally believed that moment to have happened later, in April, 2014, when I was debating getting a work visa or doing Aliyah so I could work part-time during my MBA. I was telling him the benefits and the drawbacks of both when he turned to me and said–I remember the moment crystal clearly, the exact stretch of the road we were driving on and how he said it–“I think you should do Aliyah. I want you to do Aliyah.” I felt my heart lift in my chest and I made the decision then and there and started to know that Elad and I had a future together in Israel.

That September we moved in together and a couple weeks ago Elad proposed to me in our backyard with a ring that he picked out with his sister. I would be lying if I said that our relationship has been hard, no matter how the relationships’ ups and downs sound here; the truth is that when Elad and I are together, things make sense, even when there are big looming questions. Our biggest fights hasn’t been fights; they’ve been loud, passionate, heart-felt debates that every Israeli knows intimately. And now that we’re engaged, our biggest ones have been about the things we talked about on our very first day. That’s something I could never have imagined happening when I first met the love of my life three years ago on Taglit.